Andrew Reed, founder of the Infant Orphan Asylum (which later became the Royal Wanstead School) and the London Orphan Asylum (now Reeds School) died in Hackney, London, on this day in 1862 aged 75.

At his funeral, Edward Baines Esq. M.P. (who’s sister Margaret was married to Andrew Reed’s son, Charles)  made a speech, part of which is detailed below; 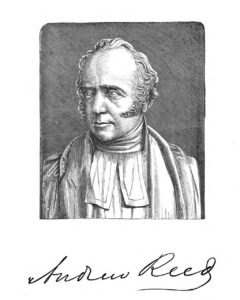 “He is a man of great talent, great refinement of mind, and much eloquence ; distinguished as a preacher in the pulpit, as an orator on the platform; distinguished as an author, distinguished as a public man, with unrivalled talents for business; and blessed, above most living men, with a largeness of heart that has made him one of the most valuable men of his day. It was his pleasure to stoop to the humblest and most needy.

The poor Orphan, the Infant Orphan, the neglected Idiot, the suffering Incurable these were the objects that attracted the warmth of his heart and called forth labours which will cause his name to live for many a generation yet to come. To have established three Orphan Asylums! Whom can we mention among our public men that has accomplished such a work as that?”

On February 27 1862, the Patriot Newspaper, printed a tribute to Andrew Reed, which included the following text;

” Upon the whole, no one can survey Dr. Reed’s long, and busy, and illustrious course as a practical philanthropist, without feeling that a public statue has been more cheaply earned, and awarded, amidst universal plaudits, to far inferior deserts. In the walk of Christian charity, he has done more, perhaps, than any other individual man or woman of his own time.

He has done it, too, for that class of his countrymen, the lower section of the middle, whose sufferings, when they suffer, are the acutest, and yet had attracted the least efficacious sympathy. <…> His name will go down to the latest posterity as The Orphan’s Friend; and who could covet a higher eulogy?”

To remember him on behalf of all Old Wansteadians I visited his final resting place in Abney Park Cemetery last weekend.

His memorial is a tall polished red granite obelisk which, as to further evidence that he was indeed the orphan’s friend, was actually paid for by grateful orphans of the London Orphan Asylum.  In 1862, the following letter was published in the British Standard newspaper relating to this;

It having been suggested by some of the ex-Boys of the London Orphan Asylum, that the duty of placing a Memorial over the grave of the late Rev. Andrew Reed, D.D., the founder

of that institution, should be undertaken by them, if the consent of Dr. Reed’s family could be obtained, and this consent having been most kindly given, a committee of ex-Boys has been formed as under, to carry out this project,

It is the intention of the committee to erect an Obelisk of polished red granite in Abney Park Cemetery, the design for which has received the approval of the family. It is expectedthat about one hundred pounds will be required for the purpose.

It is proposed to obtain as many small contributions as possible, in order that the memorial to this great and good man may be the evidence of a wide spread feeling of gratitude to a public benefactor, rather than the act of a few individuals. With this intention, it is suggested that the subscriptions shall vary from half-a-guinea to half-a-crown. The names of the contributors will probably be printed, but not the amount of each contribution, so that the youngest need not be ashamed to send his mite.

We earnestly invite you to co-operate with us in this object, to make it known to others, and to communicate with any member of the committee on the subject.

We are, dear Sir,

Even after his death, Andrew Reed continued to care for the orphans at the Infant Orphan Asylum, with the following covenant in his will;

“To the INFANT ORPHAN ASYLUM, situated at WANSTEAD, instituted in 1827, I give 100 (guineas), the interest to be applied for ever to purchase playthings for the children and to be given them at Christmas.”

And so let’s today, on the anniversary of his death, take a few quiet moments to remember Andrew Reed and the kindness and support he gave to orphans and the in-need.

This website uses cookies to improve your experience while you navigate through the website. Out of these, the cookies that are categorized as necessary are stored on your browser as they are essential for the working of basic functionalities of the website. We also use third-party cookies that help us analyze and understand how you use this website. These cookies will be stored in your browser only with your consent. You also have the option to opt-out of these cookies. But opting out of some of these cookies may affect your browsing experience.
Necessary Always Enabled
Necessary cookies are absolutely essential for the website to function properly. This category only includes cookies that ensures basic functionalities and security features of the website. These cookies do not store any personal information.
Non-necessary
Any cookies that may not be particularly necessary for the website to function and is used specifically to collect user personal data via analytics, ads, other embedded contents are termed as non-necessary cookies. It is mandatory to procure user consent prior to running these cookies on your website.
SAVE & ACCEPT