Well, what a different and challenging year 2020 has been and now, here we are, finishing the year with tighter restrictions for Christmas gatherings across the UK.  Spending time with family and making sure they are keeping well has always been important and now it is even more so.  At these times, it’s good to remember that these values were always important to the Royal Wanstead School’s founder, Andrew Reed. 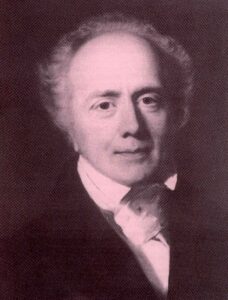 In 1813, when he was only 26, and as minister of the New Road Chapel, Andrew Reed was conscious of a parishioners final wish that his two young daughters would be cared for after his death.  Reed therefore launched a scheme to start a charity for the building of the London Orphan Asylum (LOA), the first institution he founded, for “the protection of fatherless children who are respectably descended but without means adequate to their support”.  This institution later moved to Watford and then in 1946 to a country location outside Cobham, in Surrey, where it became Reed’s School.

After the London Orphan Asylum, Andrew Reed turned his efforts to developing an orphanage exclusively for middle-class, fatherless infants under the age of seven who had previously been regarded as ‘under age’ by the governors of the LOA and so the new Infant Orphan Asylum (IOA) started by occupying houses in East London.

With support from one the charity’s loyal supporters, the Duke of Wellington, a piece of Royal land located on the edge of Epping Forest was acquired and work on a new building to house the Infant Orphan Asylum began in 1841. Opening two years later, the establishment housed 600 children. The orphanage was renamed to the Royal Infant Orphanage in 1917 and then the Royal Wanstead School in 1938.

Andrew Reed’s philanthropy  was not an easy path and the phrase ‘Nil desperandum’ became Reed’s guiding motto.  And this motto, ‘Do Not Despair’ can still be applied today, as the work he began over 200 years ago continues in the present day.

Reeds School is still in operation today and the Andrew Reed Foundation carries on his mission to help vulnerable children by providing a life-changing education for them at the school which is still located in Cobham.

A lot of Old Wansteadians often ask me about the continuing work of The Foundation and for that reason, new CEO Ali has kindly offered to present a live 1 hour webinar for FoRWS Members on Tuesday 12th January at 4pm where she can provide more information the work of the RNCSBF.

The webinar will be held via Zoom and , if you would like to attend, please email me (sec@forws.co.uk) for the link.

We do hope you are able to join the live webinar and listen to how Andrew Reed’s legacy lives on.  If you are interested in the reading the RNCSBF 2020 Annual Report, it is available here.

All that is now left is for me to wish you a very happy Christmas whatever your plans. ‘Nil Desperandum’ and take heart better days are coming in hopefully a less challenging 2021.

With All Good Wishes

This site uses Akismet to reduce spam. Learn how your comment data is processed.